BlueCat was exhibiting at CiscoLive, Cisco’s annual customer and partner conference in Las Vegas. BlueCat had just launched a new line of products (BlueCat DNS Edge, BlueCat DNS Integrity, and BlueCat Private Cloud). As a relative unknown amongst the thousands of partners exhibiting at the conference, BlueCat needed to make a splash to create awareness of the brand and the new products.

My primary role was as Art Director and Project Manager. I worked with a cross functional team including marketing, product, sales and a comic book artist from Venezuela.

In order to showcase the new products, the booth was designed with three demo areas and a large theatre with open stool seating. Each demo area featured whiteboard walls to enable booth personnel to draw diagrams during demos and meetings. Booth graphics were due well in advance of the event so it was important to keep design elements simple, using existing branding and imagery and allowing maximum space for whiteboarding. 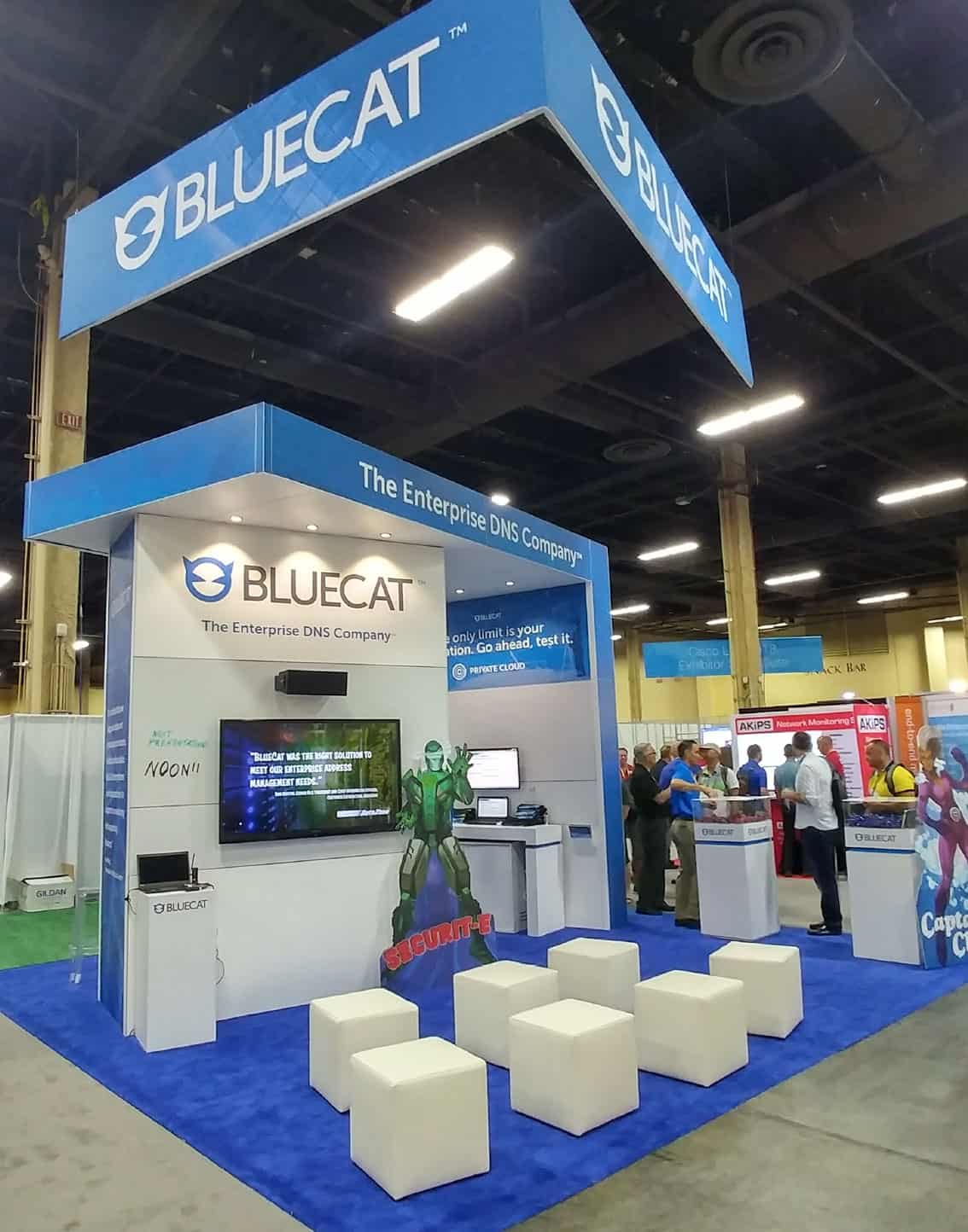 The CiscoLive theme was “Calling All Superheros”. We decided to leverage the idea and created superhero personas based on the three major products BlueCat was featuring at the event. These characters were then used in all event presentations, promotion, and branded giveaways. I sourced a comic book artist from Venezuela who then created several versions of BlueCat’s super hero characters.

Once a mild-mannered Network Administrator who managed “forests” of IP addresses for his company, his life was forever changed on the night he incorrectly entered an IP address into his spreadsheet, causing his company network to shut down. From that moment forward, he trained relentlessly and harnessed the power of Enterprise DNS. Donning the identity of “Mr. Integrity”, he vowed to never to let spreadsheets hurt innocent IT organizations again.
Previous
Next
Previous
Next

After a Security Architect was caught off-guard by a DDoS attack while working late one night, he created a special suit of armour to protect those organizations who cannot defend themselves. Powered by a limitless energy source, DNS, the suit gave him the powers of Visibility, Analysis and Action in his fight against the evil villain, Malware and his many henchmen.

When lightning struck a physical network lab, it fused the servers with a network engineer who happened to be in the lab at the same time. Suddenly, she had the power of elasticity, giving her the ability to stretch and contract to whatever shape and size she wanted. Not only did she have amazing flexibility, but suddenly she had incredible strength, allowing her easily handle the most daunting challenges.
Previous
Next

Once designed, the characters were then blown up to lifesize cardboard cutouts, to encourage attendees to take and post selfies, with designated hashtags, on social media. 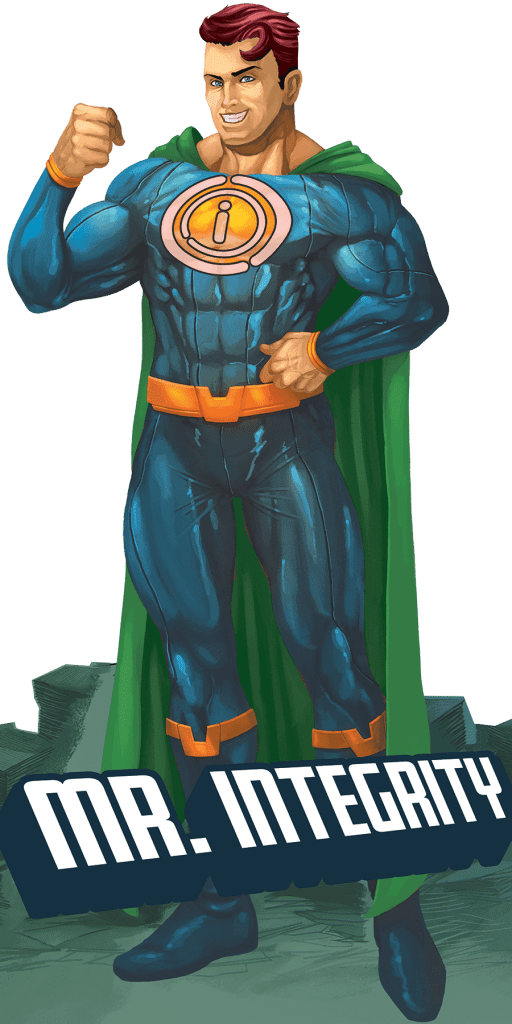 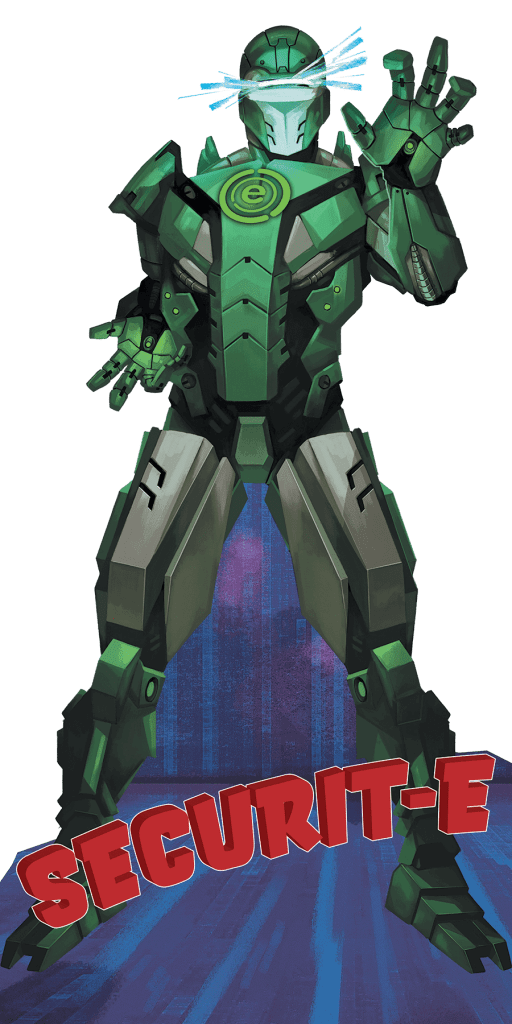 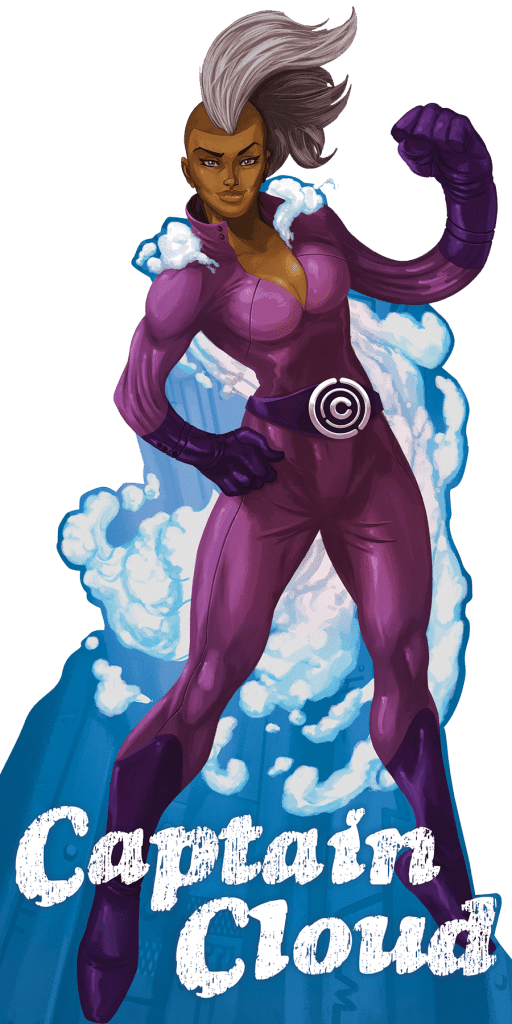 In keeping with the theme, we created comic book covers for each character, which were turned into T-shirts for booth giveaways. 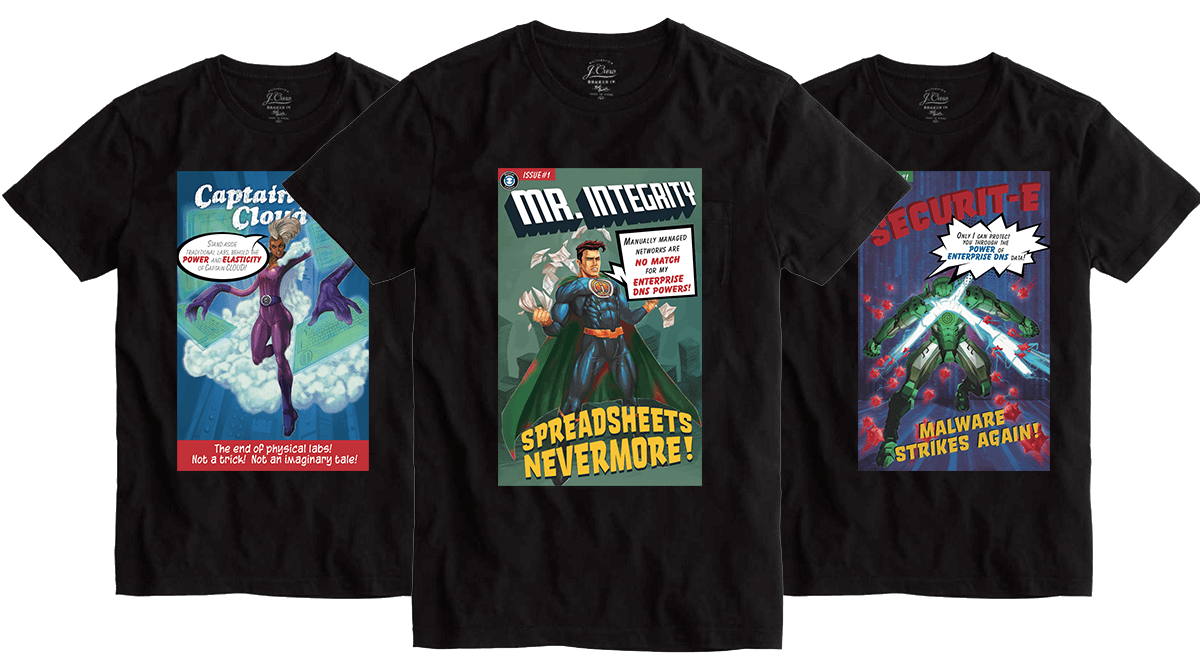 The event was a huge success. The super hero theme and messaging caught the attention and resonated with attendees.The theatre and demo areas were often filled large crowds and the t-shirts were a hot “must have” item at the conference requiring the on-site team to rush order new inventory. 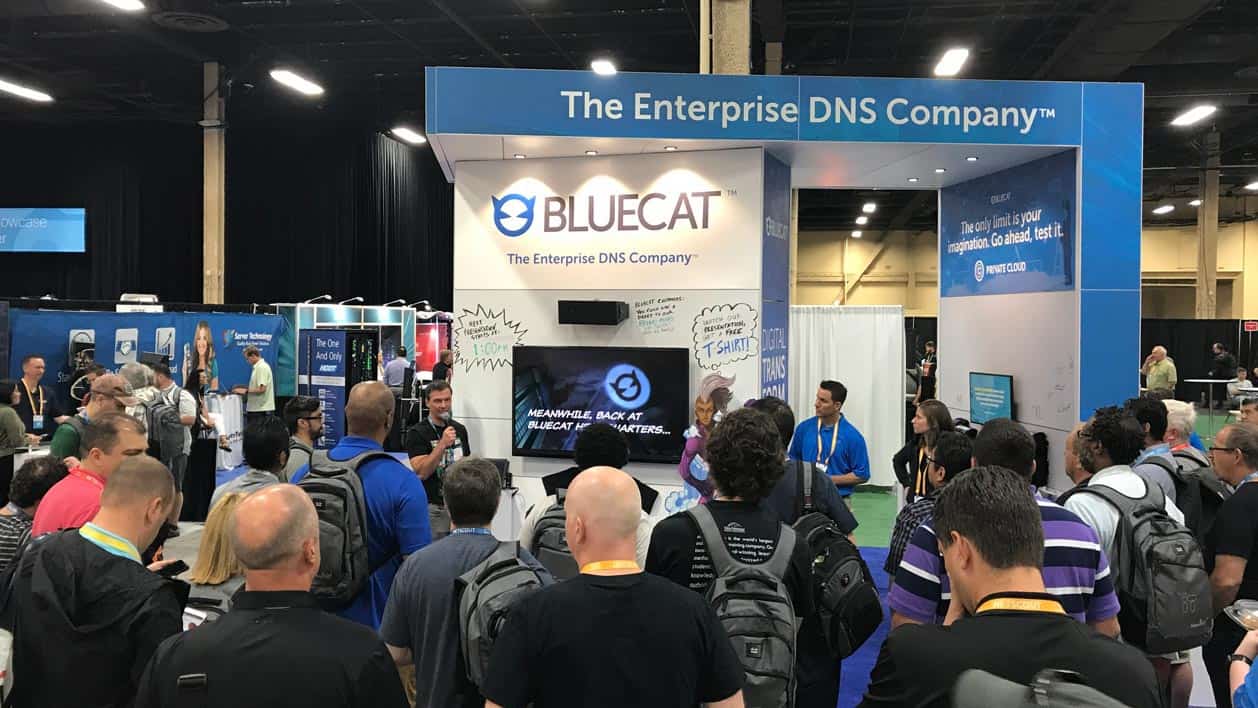 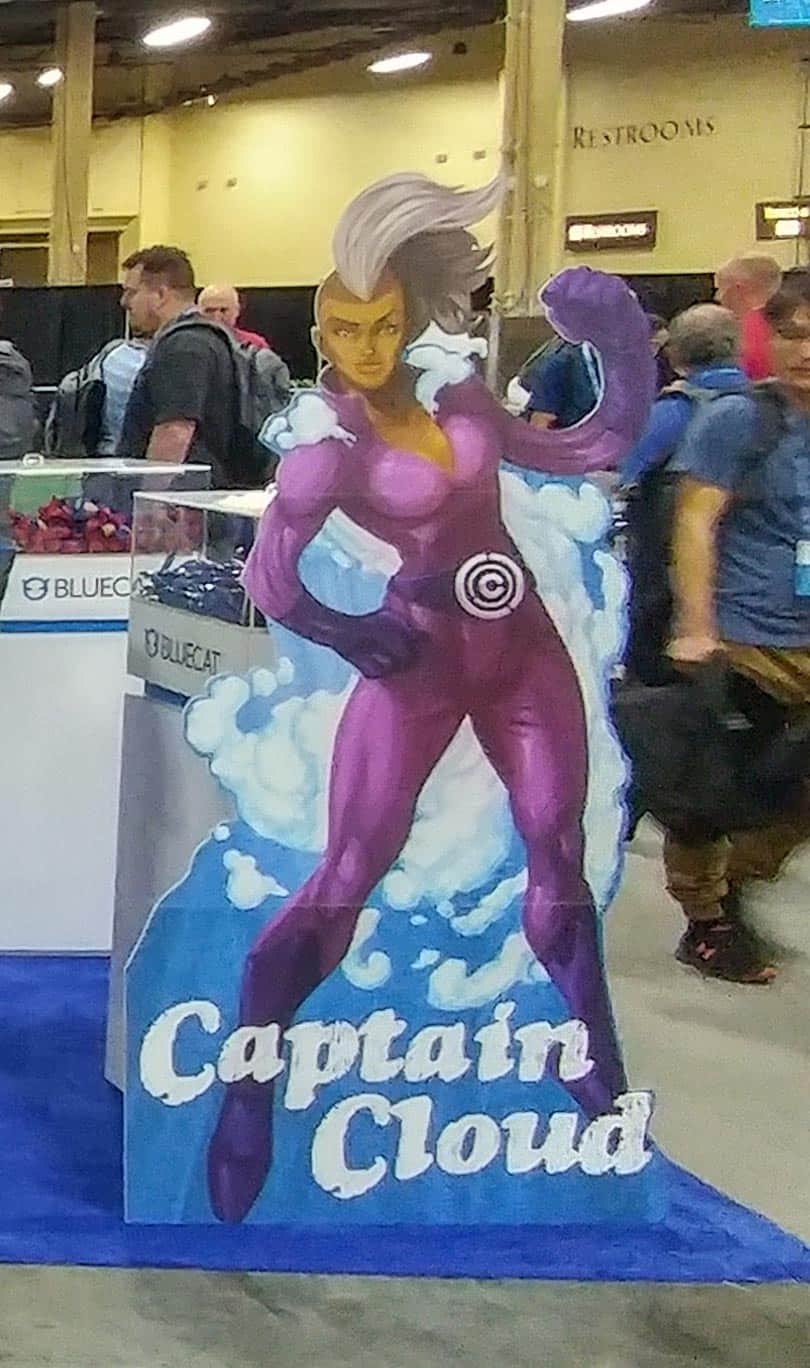 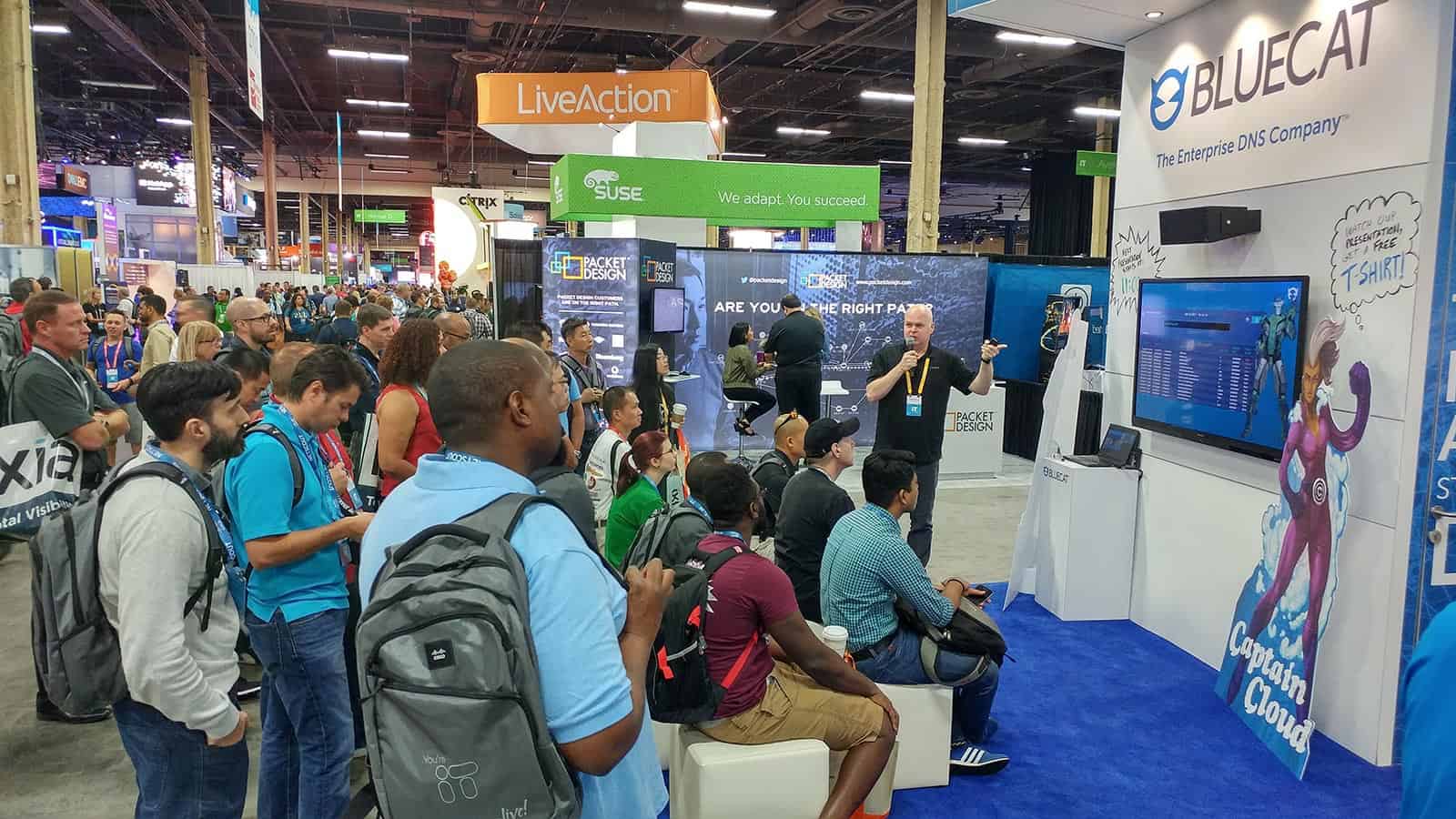 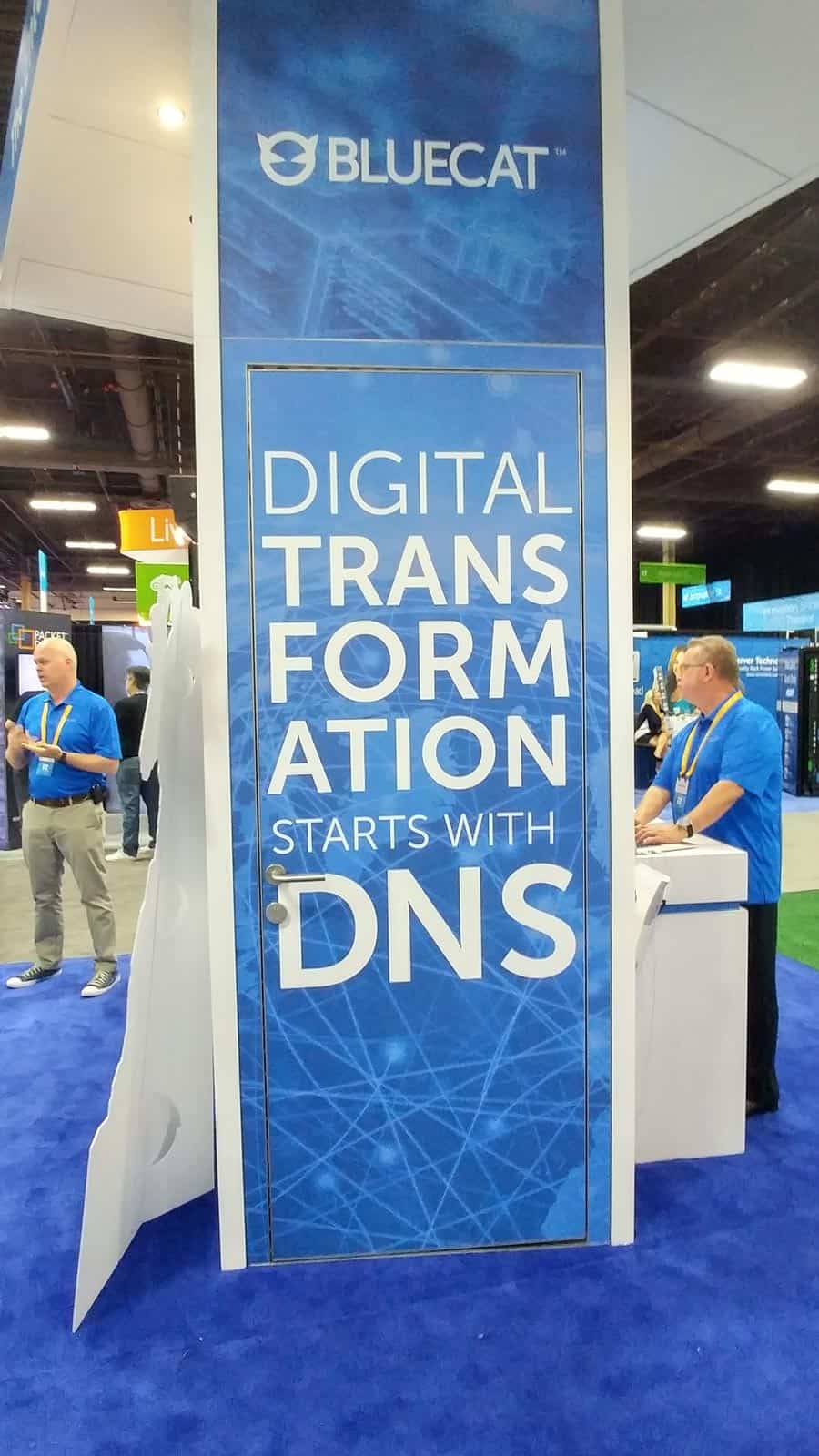 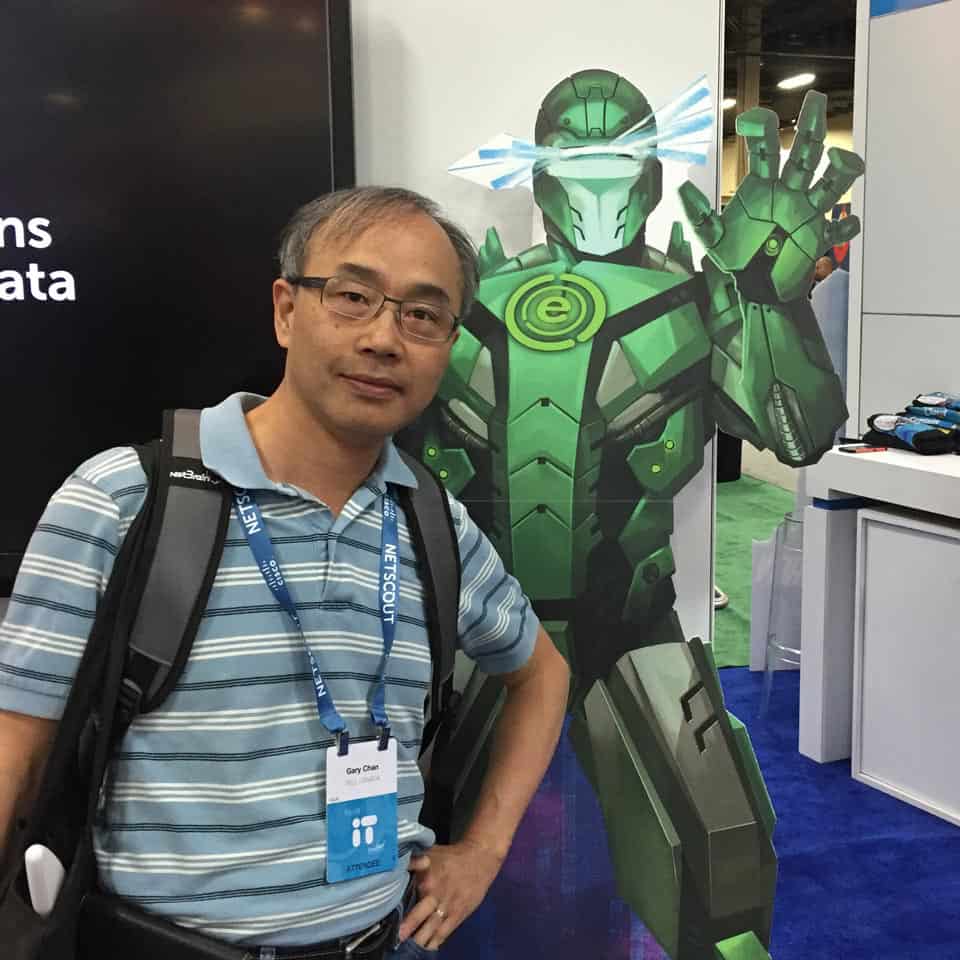 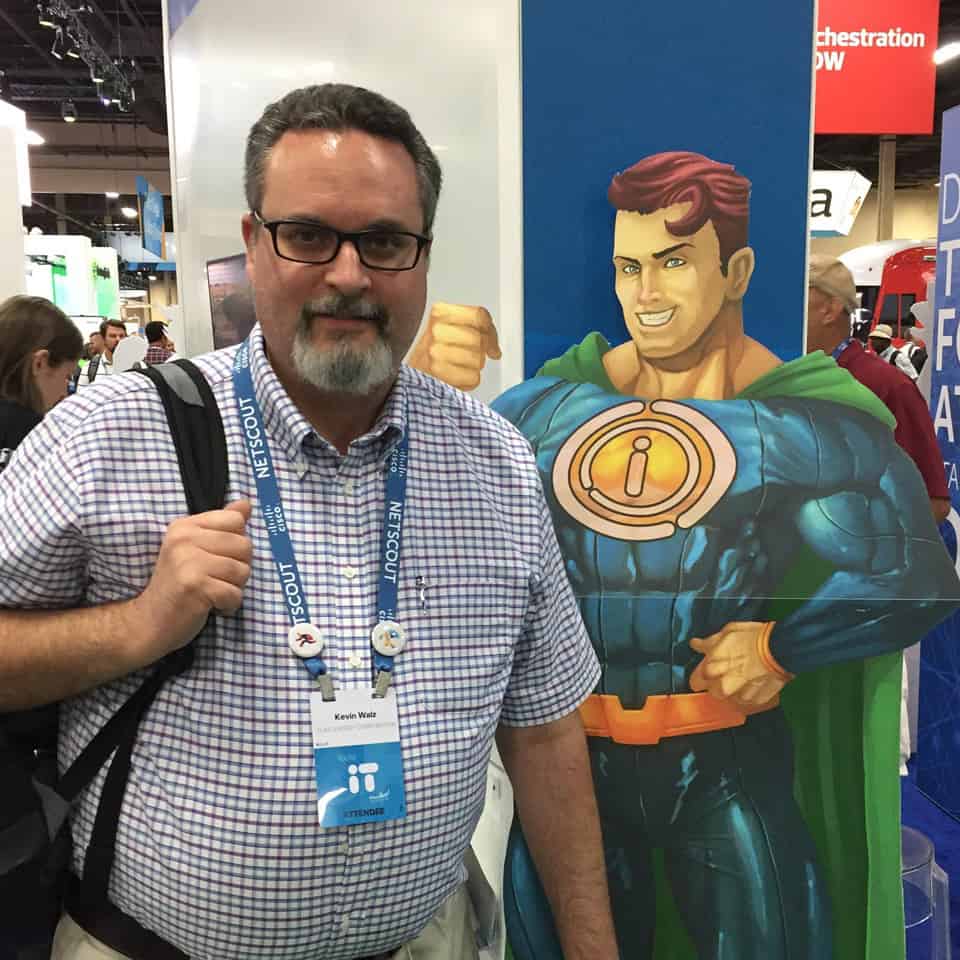 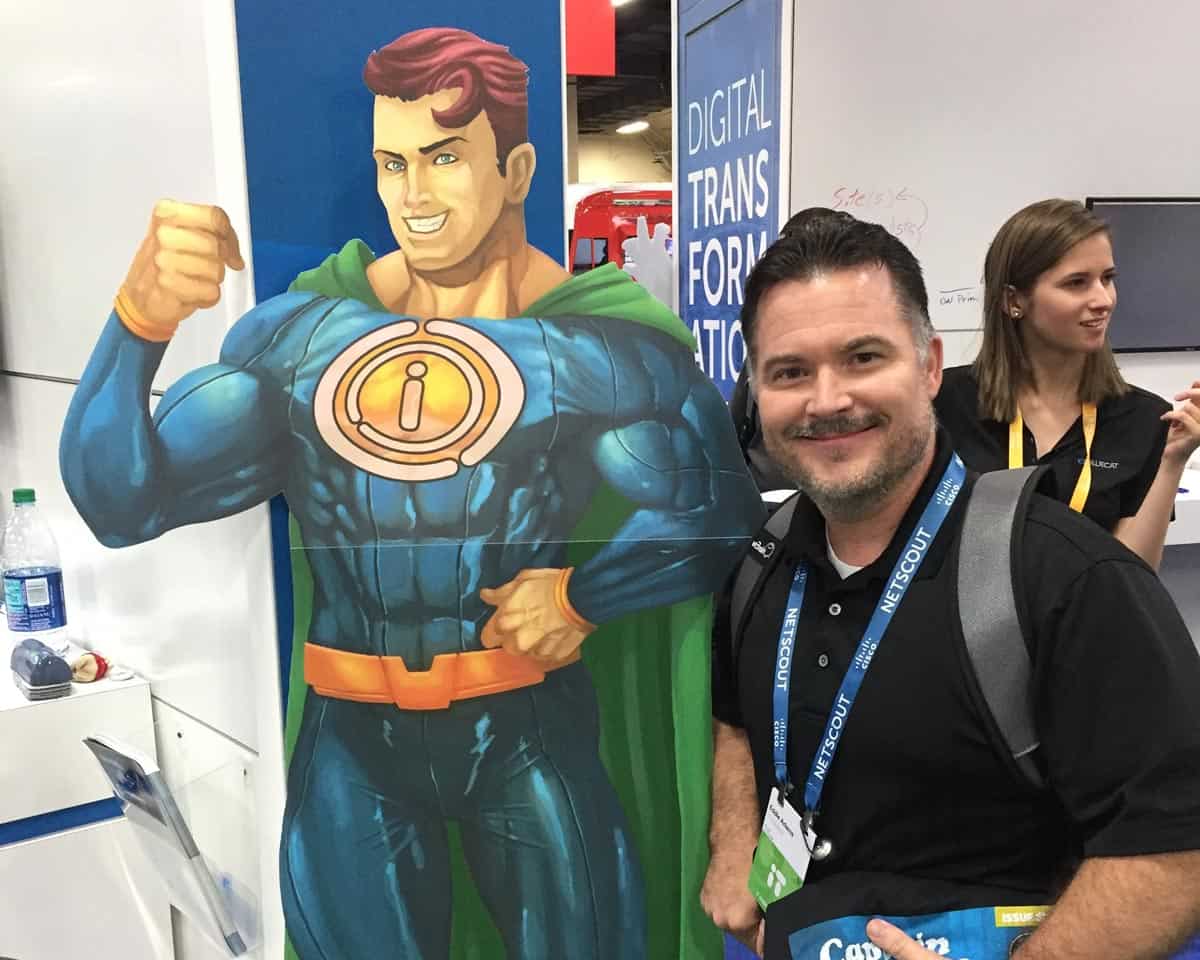 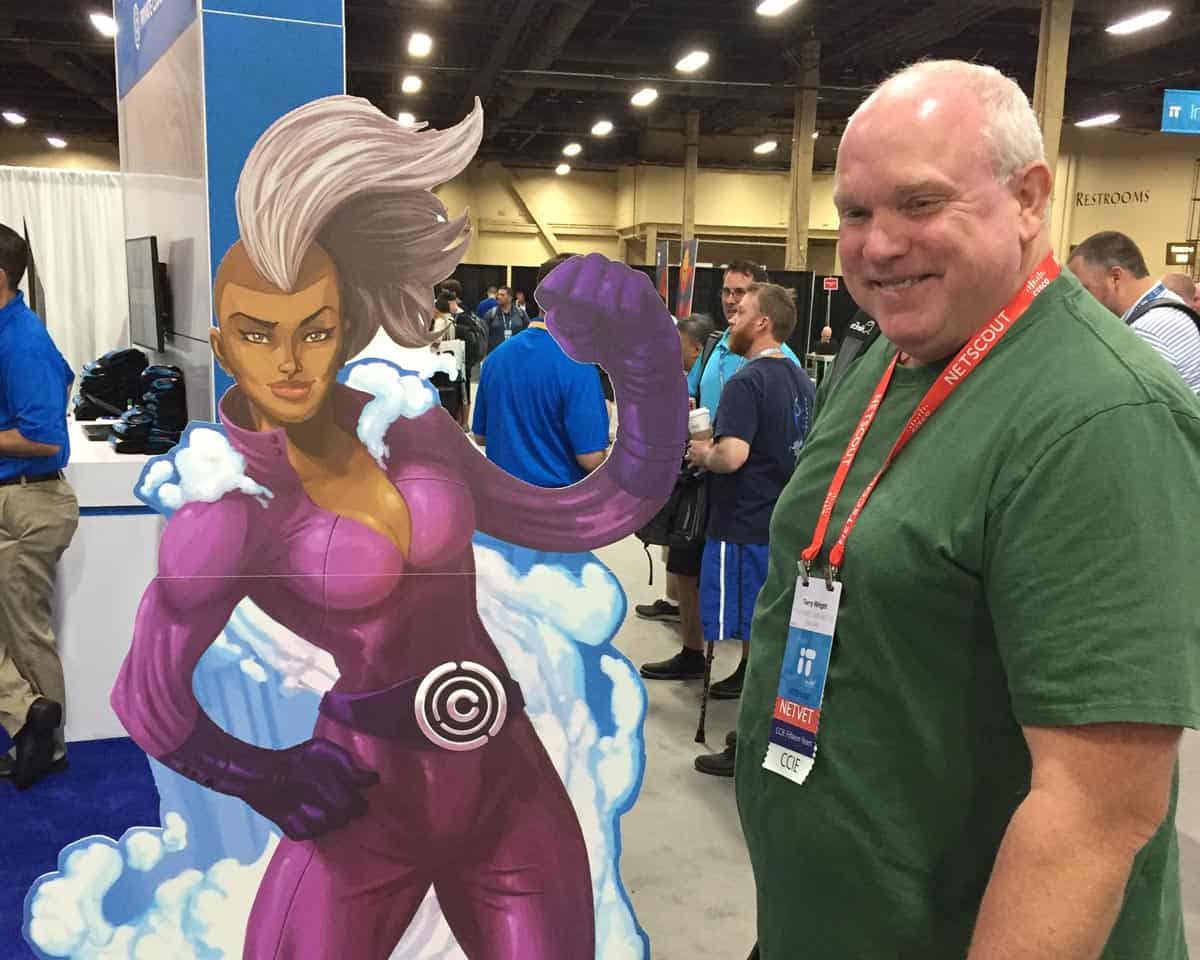 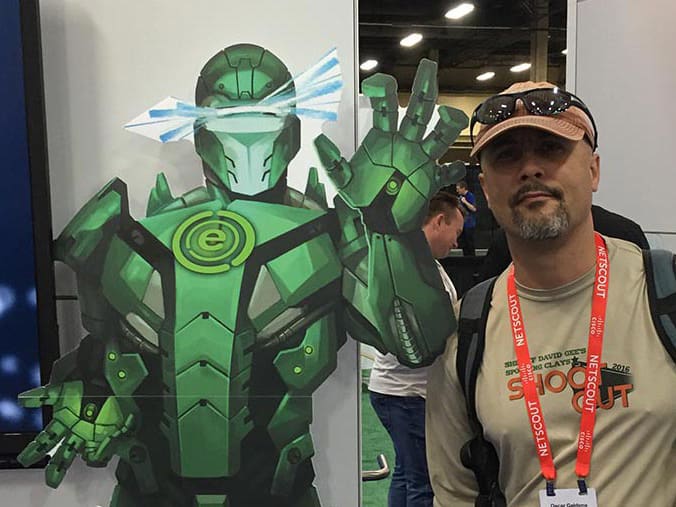